Financially-strong, Wawanesa offers dependable auto insurance at reasonable rates. However, its customer service ratings are spotty. All the same, if you can get a cheap quote, it might be worth a shot.

Wawanesa Insurance was established way back in the late 19th century and gets its name from the town in which it was founded — Wawanesa (Manitoba). Though it started as a farmers’ mutual insurance carrier, Wawanesa is today one of Canada’s top insurance companies.

Presently, it is headquartered in Winnipeg and offers a number of insurance products, including auto insurance, to people from all walks of life across Canada.

To determine the quality of its auto insurance, we analyzed various Wawanesa Insurance reviews and gathered a quote to check its affordability. We also compared it to its chief rivals and examined Wawanesa’s financial stability and customer service ratings.

So what’s the bottom line? Is Wawanesa right for you?

Read our detailed review so you can decide for yourself.

Wawanesa, one of the key players in the Canadian auto insurance industry, provides reasonably-priced coverage options and a host of useful features.

Wawanesa makes it easier for its policyholders to make a claim. The Wawanesa insurance phone number goes as follows: 1-844-929-2637, and the lines are open day and night. Alternately, you can file a claim through its website by filling a claim form.

Available on both Google Play and the App Store, the Wawanesa app gives you access to virtually all service on the go. You can use it for the following functions:

Wawanesa Insurance website, while pretty basic, is easy to navigate and use. However, even though the website has a capacious blog section packed with advice about how to be safe behind the wheel, some of the key information is missing. For instance, we couldn’t find information about optional coverages. Apparently, the only way one can find this out is by contacting a broker. Thankfully, finding a broker on Wawanesa Mutual’s site is a breeze. Just click the Find a Broker tab and conduct a search by location or broker name.

Designed specifically for pet lovers, Pet Accident Wording Supplements covers your cat or dog in the event of an auto accident. It pays for veterinary bills, prescribed drugs, and boarding fees.

Wawanesa Canada has received an impressive “A” or “Excellent” from A.M. Best. This rating speaks of its financial stability and ability to pay out claims.

On top of these, Wawanesa offers a number of add-ons to help you get the kind of protection that perfectly fits your needs. To know more about its optional coverages, speak to a broker near you.

Wawanesa claims of “earning your trust since 1896”, but do its customer satisfaction ratings live up to its claim?

Unfortunately, the answer is “no.” Wawanesa’s performance in 2019 J.D. Power Canada’s study is mediocre, to say the least. It made it to the list in three out of four major provinces — Alberta, Atlantic, and Ontario — but its highest rating is only three stars, which is just about average.

Interestingly, Wawanesa Auto Insurance Canada received a much better rating of “A+” from Better Business Bureau that rates companies based on how they handle customers’ complaints. However, the insurer could only notch up a score of 1.5 out of 5 on Insureye, an independent site that offers consumer insurance reviews. That said, a low score on such online platforms is not uncommon for a business of its size. More than anything, this result shows that consumers are more inclined to leave an online review when they have had a disappointing experience than a positive one.

Wawanesa Canada is not your regular one-size-fits-all auto insurer. Instead, it offers a wide selection of policyholder-specific discounts to help you get the best rate based on your profile.

Multi-Vehicle Discount — All Canadian insurance companies offer this rebate, and Wawanesa is no exception. You can expect the insurer to reward you with a substantial discount when you cover multiple vehicles.

Bundle Discount — Pairing Wawanesa home insurance and auto insurance can help you net a handsome discount on both coverages.

Mature Driver Discount — Are you over 50 years of age? Then there’s some great news for you! You’ll have to pay less for car insurance, thanks to Wawanesa’s special discount for experienced drivers.

Driver’s Education Discount — Completing a driver’s education or defensive driving course can help improve your driving and save on Wawanesa car insurance as well.

Minor Conviction Free Discount — If you hold a clean driving record, Wawanesa will not bump up your premium because of a minor conviction.

Loyalty and Reward Discounts — If you stick with Wawanesa, the insurer will reward you by offering you a discount at every renewal.

Retiree Discount — If you are a retiree with a good driving record, expect a discount on your Wawanesa auto insurance.

No Claims Discount — Good drivers deserve great car insurance rates, right? Well, Wawanesa tends to agree. If you haven’t made a claim for a certain number of years, the insurer will lower your premium.

Anti-Theft Discount — This discount is available to all Canadian drivers who have fitted an approved anti-theft device in their cars.

Wawanesa’s website claims that it provides car insurance that is easy to understand, customized for you. However, what the company doesn’t promote is how much its “tailored-to-your-needs” protection costs.

To find out, we gathered a quote from it for Halifax, Nova Scotia. Our research shows its rates are neither the cheapest nor the costliest. 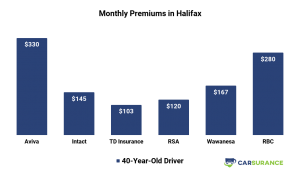 At $167 a month, Wawanesa car insurance quote for Halifax, Nova Scotia, falls somewhere in the middle of the price scale, being roughly 38% more expensive than the most affordable insurer and almost 49% less costly than the most expensive option.

The specs we included when requesting a quote from Wawanesa are as follows:

Wawanesa Insurance vs the Competition

Desjardins is a more cost-friendly option than Wawanesa in most places. The former also offers a much wider selection of discounts.

However, both players have a similarly poor record in customer service. Desjardins earned two stars in 2019’s J.D. Power Canada study for the Ontario province and three stars in the Quebec region. On the other hand, Wawanesa Insurance Canada managed three stars in the Alberta region and two stars each in the Atlantic and Ontario regions.

As far as financial stability is concerned, both are on a solid footing. While Wawanesa received an “A+” from A.M. Best, Desjardins holds an equally impressive “AA1” Moody’s rating and an “A+” S&P’s rating. In short, you can count on them to fulfill their part of the bargain when the time comes to pay a claim.

To sum it up, it all boils down to the price between Wawanesa Mutual Insurance and Desjardins. Pick whichever is cheaper in your city, since their performances in other important departments are pretty much the same.

Aviva’s record in customer service is even poorer than Wawanesa’s, and that’s saying something. It came dead-last in the Alberta and Atlantic regions, second-to-last in Quebec, and third-last in Ontario.

The price comparison between the two, however, gave us mixed results. While Wawanesa Mutual Insurance Canada is significantly cheaper than Aviva across Nova Scotia, the latter delivers a great bargain in other provinces, such as Ontario.

Wawanesa has its nose in front in the financial health department, albeit ever so slightly. A.M. Best, the US-based rating agency, gave it an “A+” rating, whereas Aviva got an “A”.

Therefore, unless you are a Lyft driver, we recommend you go with the company that offers more bang per buck.

Like its rival, Allstate doesn’t have a great record in customer service. It features only in the Ontario region, where all it could manage was an average three-star rating.

However, Wawanesa insurance reviews reveal that Allstate’s premiums, while not the cheapest around, are more affordable than Wawanesa’s. The former also offers more discounts, making it an even more attractive option for budget buyers.

There’s nothing to choose between the two as far as financial stability is concerned. Both received an impressive “A+” rating from A.M. Best.

All things considered, Allstate appears to be offering a better overall deal. Nonetheless, we advise you to get a Wawanesa auto insurance quote as well and compare it with Allstate’s. Only then will you know for sure which one suits you best.

In case Wawanesa’s customer service ratings are a concern, check out The Co-operators or RBC. However, both are a little pricey, so be prepared for some extra outlay.

TD Insurance, in contrast, is the most pocket-friendly auto insurer across Canada, but their customer service record is not a whole better than Wawanesa’s.

Aviva and Intact look like an appealing option for those who want car-sharing coverage while Sonnet might be right if you want great online tools.

Perhaps the best course of action would be to check how Wawanesa quote stacks up to the rest and then decide whether you want to go with it or not.

Wawanesa offers dependable auto insurance and is in great shape financially. Its rates, while not the most affordable, are reasonable. However, its customer service ratings are poor. Nevertheless, if you can get a cheap quote from the insurer, you might want to consider it.

We couldn’t find this information on its website, nor in various Wawanesa insurance reviews. Therefore, we recommend you speak to a broker if you need accident forgiveness coverage.

Since the Wawanesa website doesn’t provide information about coverage options, we advise you to get in touch with a broker near you.

Wawanesa offers consumers multiple payment options. You can pay by way of pre-authorized debits, online with your credit card, directly through your credit union or bank account via online or telephone banking, or through a cheque. What’s more, you can even pay the annual premium of your Wawanesa auto insurance policy by installment. Speak to your broker if you want to learn about available instalment plans or set up payment by installment.

Wawanesa Insurance does provide road assistance. To learn more about this coverage, we recommend you to get in touch with a broker near you.

Sushant Mehta is an auto insurance specialist and a contributor at Carsurance.net. He has a keen interest in insurance, tech, and finance, and he’s been covering these topics for several years now. When he’s not working, he likes to escape to the lower Himalayas with a book or two to keep him company.

Copyright Carsurance.net. 2021 - All Rights Reserved
Back To Top