Reasonably-priced and well-supported by a reliable customer service team, belairdirect offers car insurance solutions directly to customers. However, its selection of optional coverages and discounts is not the best. If that’s not a big concern, you should definitely give belairdirect a shot.

Founded in 1955 and an offshoot of Intact Financial Group, belairdirect provides home and car insurance solutions directly to customers. In 1997, it became the first North American insurer to offer auto insurance quotes online.

To check how it stacks up against the competition, we perused a number of belairdirect insurance reviews. We also analyzed its performance on crucial factors, like premium rates, customer service, range of optional coverages and discounts, and financial strength.

So what’s the bottom line? Is belairdirect a good choice for you?

Read our comprehensive review so that you can decide for yourself.

Belairdirect provides reasonably-priced car insurance directly to Canadian drivers. It offers a range of useful features, such as the ones mentioned below.

Filing a claim with belairdirect is quick and easy. Simply dial this belairdirect phone number in case of an emergency — 1 877 228.2656. Alternatively, you can submit a claim online via its Client Center or through its smartphone app.

Besides allowing to file and track a claim, the Client Center allows you to access insurance documents, request roadside assistance, update your address and add a driver, and get a digital proof of insurance from belairdirect website anytime, anywhere.

Belairdirect online quoting tool is sleek and fast, and its website quite handy, as confirmed by several online belairdirect reviews. However, it was its app that impressed us the most. Belairdirect app is much like an insurance concierge right in your pocket. Whether you need to put in a claim, change the address or add a driver to your policy or request a tow, the app makes sure you’re taken well care of 24 by 7.

Belairdirect insurance promises high-quality workmanship and a worry-free claim experience if your car gets damaged due to a covered risk. When you select one of the handpicked repair shops, the insurer duly reinspects the repair work before handing over the keys and settles the bill directly with the repair center. Belairdirect offers a guarantee on covered repair, provided you are the owner of the vehicle.

Financial strength is an important factor to consider when buying car insurance. If the insurer goes broke while you’re in the middle of a claim, you’d be left up the creek, which is the last thing you would want.

Thankfully, with belairdirect car insurance you can rest easy on this account. It is a subsidiary of Intact, whose financial standing is as good as they come. A.M. Best awarded Intact the highest-possible rating of “A++.” In other words, with belairdirect by your side, you don’t have to worry about your safety net disappearing down the line.

Apart from these,  the insurer provides several optional coverages, although not as many as some of its competitors, such as RBC.

Most top Canadian auto insurers offer this add-on, and belairdirect insurance is no exception. The insurer will not push your premium rate up as a direct result of your first at-fault accident, as long as you haven’t filed a claim in the last seven years.

Belairdirect offers an additional coverage called Autocomfort, which pays for the cost of replacement rental vehicle — up to $3,000 per event — in the event of an insured loss. It also includes rental vehicle insurance — capped at $55,000 — for damage caused to a rented car anywhere in Canada and the US.

According to belairdirect car insurance reviews, this add-on is only available when you have Collision and Comprehensive coverage on your policy.

Belairdirect has got your back if your vehicle starts playing up. Whether you need a tow, a battery boost, or a wheel change, the insurer is there for you, 24/7. You can request roadside assistance over the phone or via the belairdirect auto insurance mobile app.

The Relation Between belairdirect and Intact Insurance

Both belairdirect and Intact insurance are owned and backed by the Intact Financial Group, which is the number one property and casualty insurance provider in Canada and a top provider of specialty insurance in North America.

The insurer has a decent record in the customer service department. According to belairdirect auto insurance reviews, it received an impressive 4-star rating in the 2019’s J.D. Power study for the Ontario region. However, in Quebec, its rating was down one notch. The insurer didn’t make it to the list in Alberta and Atlantic regions.

Belairdirect’s record with Better Business Bureau (BBB), which ranks companies on their ability to handle customers’ complaints, is even more impressive. BBB awarded it the highest rating of “A+.”

However, belairdirect insurance customer reviews on InsurEye are largely negative, and its overall score there is meagre — 1.9 out of 5. Many customers have laid into it for handling claims poorly, a mediocre mobile app, and slow service. However, as there’s a decisive negative bias on sites like InsurEye, we recommend you to take this result with a pinch of salt. Statistically speaking, customers are more inclined to leave a review online when things don’t go their way than when they do.

Belairdirect insurance reviews reveal it offers customers a number of ways to save on car insurance.

Multi-Vehicle Discount — Insuring two or more vehicles with belairdirect can help bring your premium down by as much as 15%.

Senior Citizen Discount — Belairdirect rewards mature drivers with impeccable driving records. Sounds like you? Get a quote to see how much you can save.

Bundle Discount — Pair belairdirect home insurance with car insurance and save up to 15% on both.

Student Discount — If you’re under 23 and a full-time college or university student, there’s good news. Auto insurance has just got more affordable for you, thanks to insurer’s special discount program for students.

Safe Driving & Low Mileage Discount — Safe drivers deserve better rates, right? Guess what, belairdirect tends to agree. If you can show you are a good driver, you can save up to 15% on your belairdirect car insurance coverage through its automerit program. What’s more, you can shave another 15% off by driving fewer than 10,000 kilometres a year. And the best part is that you win a 10% discount right off the bat for just signing up.

Group Discount — Customers who are part of a Group Program with belairdirect are eligible for a preferred group discount for auto and home insurance.

Belairdirect projects itself as a progressive and affordable auto insurer. However, does it really offer dependable coverage at a good price?

We decided to look under the hood and put its online quoting tool to the test. Guess, what we found? 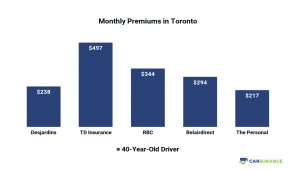 Belairdirect premium rates are certainly better than the average — but they are not the lowest around. For instance, belairdirect Toronto quote was roughly 19% costlier than the most affordable option and 13% cheaper than the city’s average. The narrative was more or less the same in other cities as well.

Our quote was for a male driver, aged 40 years, with a pristine driving record. Our referenced vehicle was a 2018 Honda Civic SE with a yearly average of 15,000 km.

According to belairdirect insurance reviews, it is miles ahead of Aviva in customer service. While it received four stars in Ontario and three in Quebec, the latter could only manage a two-star rating in both.

However, Aviva delivers a better bargain than its competitor. We found its rates to be consistently lower — and by some margin — in most places. For instance, the average belairdirect Ottawa rate is around 33% higher than Aviva’s. In the financial health department, belairdirect holds an advantage. It got the best rating of “A++” from A.M. Best, whereas Aviva only got “A.”

Both of them offer ride-sharing services. While belairdirect, like its parent company Intact, caters to Uber drivers, Aviva extends coverage to Lyft drivers.

All in all, if you are someone who values customer service more than price or drives for Uber, consider belairdirect insurance. Budget buyers and Lyft drivers, on the other hand, should give Aviva a try.

Both belairdirect and RBC present themselves as customer-oriented companies, but which one is likely to take better care of you?

However, belairdirect’s coverage is easier on the pocket. Compared to RBC, it is also more solid financially, earning the top “A++” rating from A.M. Best. RBC, in contrast, lags behind at  “A.”

To sum it up, place belairdirect above RBC if the cost is the main factor for buying car insurance and below it if your priority is top-notch service.

Belairdirect vs The Co-operators

Belairdirect car insurance Canada reviews reveal its rates are more or less in the same range as The Co-operators’.

But what about customer service? Who’s better here?

The Co-operators beat belairdirect to the punch in this department — and that’s hardly a surprise. After all, it is the blue-eyed boy of customer satisfaction surveys, notching up the first place in all three provinces in which it features — Ontario, Alberta, and Atlantic regions.

Nonetheless, superlative customer service swings our preference in favour of The Co-operators. That said, if you need Uber ridesharing coverage, belairdirect might just be the one for you.

If you want the best bang for your buck, consider TD Insurance. That said, its customer service record is pedestrian at best. Another pocket-friendly option is Progressive. It even has a decent record in customer service but is available only through group programs. If you don’t qualify for it or place a high value on customer service, check out The Co-operators and RBC.

Perhaps the smartest thing to do is to grab a belairdirect car insurance quote and compare it with others. Only this way you can be fully sure that you’ve got the best deal.

Belairdirect’s rates are quite reasonable, customer service is pretty good, and financial standing is second to none. It rewards Canadian drivers for driving safely, as well as for driving fewer kilometres. Additionally, it offers ridesharing coverage that works with Uber. However, its selection of additional coverages and discounts is not the most exhaustive.

All in all, belairdirect has a lot going in its favour and fully deserves your attention.

1. Is belairdirect a good insurance company?

Established in 1995 and a subsidiary of Intact Financial Group, belairdirect offers car and home insurance products directly to consumers. It is one of the top companies for car insurance in Canada and offers dependable coverage at reasonably-affordable rates and backed by quality customer service.

2. Does belairdirect have accident forgiveness?

Yes, it does. Customers who want to protect their good driving record and insurance premium can add accident forgiveness to their policy. According to belairdirect car insurance reviews, it will not bump up your rate as a direct consequence of your first at-fault accident, as long as you have not made a claim in the past seven years.

3. Is belairdirect owned by Intact?

4. Does belairdirect do motorcycle insurance?

Belairdirect, unlike some other top-ranking auto insurers in Canada, does offer motorcycle insurance. As a matter of fact, it offers custom-made insurance coverage that ensures you get a solution that perfectly meets your needs. Aside from motorcycles, the insurer provides coverage to several other special vehicles, such as travel trailers, ATVs, and snowmobiles.

Yes, it does. According to belairdirect insurance reviews, it offers an optional coverage called Autocomfort, which includes $55,000 rental car coverage. This optional coverage also pays for the cost of replacement car (up to $3,000 per event) while yours is being repaired.

Sushant Mehta is an auto insurance specialist and a contributor at Carsurance.net. He has a keen interest in insurance, tech, and finance, and he’s been covering these topics for several years now. When he’s not working, he likes to escape to the lower Himalayas with a book or two to keep him company.

Copyright Carsurance.net. 2021 - All Rights Reserved
Back To Top